For the best Shack Rewards experience, please ensure that "Prevent cross-site tracking" and "Block all cookies" settings are disabled by going to Safari > Preferences > Privacy.

what kind of order can
we get started for you?
Order ahead for pick-up or have Shane’s delivered to you.

ATLANTA (April 2, 2013) – For the fourth year, Shane’s Rib Shack will celebrate May, the official month of barbecue, by giving away a free half rack of our slow-smoked baby back ribs a 20 ounce beverage, plus a special edition Rib Giveaway t-shirt (size XL) to the first 100 guests to arrive at all participating Shane’s Rib Shack locations on Saturday, May 18, 2013.

“It’s impossible to imagine not rewarding our guests with this once a year free rib offer,” says Shane Thompson, president and founder of Shane’s Rib Shack. “For the fourth year, Shane’s Rib Shack will honor its loyal following with a well-deserved free half rack of our signature baby back ribs. I can’t think of a better way to thank our loyal guests while, at the same time, celebrating National Barbecue Month.”

In addition, throughout the month of May, Shane will be showing up around Metro Atlanta delivering racks of ribs to unsuspecting folks. Spot him, and you could personally receive free ribs from the man himself. Become a fan of the Shane’s Rib Shack Facebook page and follow Shane on Twitter to keep up with his whereabouts during National Barbecue Month.

Help us support Shane as he continues his official term as the “Commissioner of BBQ.” Shane will share barbecue and grilling tips, continue his ongoing community involvement, and seek customer input from loyal Shaniacs on everything from menu items to future promotions and special events.

Shane's Rib Shack is a true American rib shack, known for its slow-smoked ribs, hand-chopped chicken and pork, and many southern sides to complement each plate.  The original shack was founded in 2002, in McDonough, Ga. by Shane Thompson, who started the restaurant with his grandfather's secret BBQ sauce.  Since becoming a franchised restaurant in 2004, Shane's Rib Shack has grown to become the country's fastest growing fast-casual barbecue concept. In 2011, Shane’s Rib Shack was recognized by Fast Casual Magazine’s 2011 Top 100 Movers and Shakers, and in 2010, Shane’s was recognized by “Inc. Magazine 5,000,” as one of the fastest growing, private companies in America. Shane’s Rib Shack currently operates more than 70 locations.  For more information, visit http://www.shanesribshack.com.

Back to News Updates 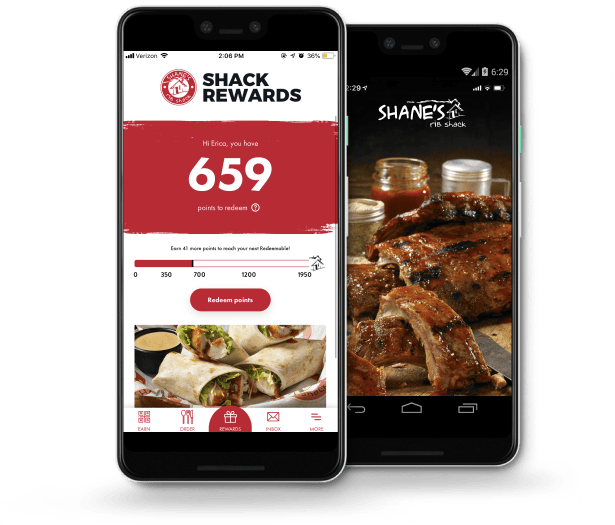 Free Big Dad® Sandwich when you download the app.